Formed in 1963 by Michael Mahoney, taking its players from the members of St Edmund Campion Youth club, in 1976 through Peter Kennelly the club was renamed Campion F.C.

The club moved back into open age football in 1975 entering the Bradford Sunday League 4th division and gained promotion over five years to the 1st Division. In 1976 the club entered the Red Triangle League a local Bradford Saturday League and after steady years of progress moved up to the Premier Division in 1979. The following season saw Campion lift the Premier division league cup as well as finish runners up in the league.

1981 saw the clubs policy change to concentrate on Saturday football only as they entered the West Riding County Amateur League and in 1983 both its open age teams were in the W.R.C.A.F.L.

Due to financial difficulties and the resignation of both the 1st and 2nd team managers along with the club secretary the club withdrew from the W.R.C.A.F.L. in 1985.

Under new secretary Andy Shepherd the club re-formed and entered the premier division of the Red Triangle League for the 1985/86 season. The club were accepted again back into W.R.C.A.F.L. in 1986.
Steady progress was made during the next few season’s and by 1989 they were established in Division 2.

At the start of the 1989/90 season former player Delroy Dacres was appointed manager a position he still held nearly a quarter of a century later when he finally retired in 2013!
In his first season in charge the Division 2 League and cup was won. This was followed by the Division 1 league and cup in 1992/93 bringing premier Division football to the club. The 1993/94 season saw the club’s reserve side win the Division 4 championship under the guidance of Dave Simpson and Andy Smith. 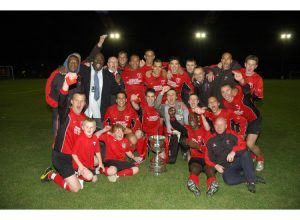 Since the year 2000 the club have won numerous cups missing out on the League title by 1 point in 2005/06 despite winning 20 league matches on the trot.
However with out doubt the highlight of the clubs history was in May 2007 when after going a goal down to League rivals and former County cup winners Golcar United goals by former Bradford City and Newcastle united player Des Hamilton and a last minute winner by Micky Burke saw Campion Lift the County Cup.
Season 2007-08 saw Campion retain the W.R.C.A.F.L. Premier Division League Cup for the third year on the trot making it a total of 4 wins in the last five years

Campion have since lifted the Bradford & District FA Cup twice in 2010 and 2012 the latter with a “Manchester United” style win over Salts. Trailing 1-0 going into stoppage time goals from Thomas Howard and Nathan Woodward saw the cup return to Scotchman Road for the third time.

In 2011-12 the Reserves under the leadership of Howard Gordon won the W.R.C.A.F.L. Division Two championship following a run of 5 wins in the last 6 games saw them clinch the title by 3 points.

Since then the club has maintained steady progress and seen improvement both on and off the field of play. 2006 saw the club enter a new era with the opening of a
£1.5 million club house and community centre under the banner of Manningham Mills Sports Association of which Campion F.C. is a partner along with Manningham Mills Cricket Club and Heaton Juniors F.C.

In 2007 Heaton Juniors changed there name to Campion Juniors in partnership which hopefully see more home grown players progress through the ranks.

In 2013 Delroy Dacres announced that he was to retire as first team manager after 25 years in charge. Without doubt a larger than life character Delroy’s booming voice will be missed not only at Campion but other grounds throughout the league.

He has been succeeded by club favourite James Bicknell who has since continued to ensure Campion remains one of the leagues top teams.

The following season saw Howard Gordon step down as Reserve Team Manager to be succeeded by former Campion member Greg Andre. Andre failed to emulate the success of his predecessor and was removed shortly after only seven months in charge. It was fortunate that the club was approached by Wibsey Lions manager, Dave Turner, who was looking to bring a number of younger players to Campion AFC which would not only bolster the ranks of the Reserve team but also create a brand new Under 21’s side that would compete in the inaugural year of the leagues U21 competition. Turner also took the role of assistant manager of the Reserve Team to the newly appointed Mark Palfreeman, a senior player who had turned to management following the departure of Andre.