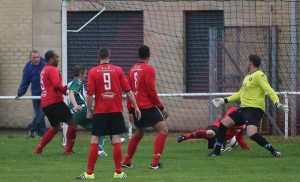 Steeton AFC continued their wonderful start to the season beating another of the title contenders in a hard fought 3-2 victory in rainy conditions.

Despite suffering an early setback in the form of a Joel Hughes goal Steeton showed character in the face of a good deal of Campion pressure and capitalised on a defensive error to go into the break at 1-1.

A goal either side of half time knocked the stuffing out of Campion who again looked vulnerable from a corner to concede a second within five minutes of the restart. This was further compounded as Lee Reilly broke from en Elliott Holmes mistake to tuck away his third.

There was a small consolation as Jordan Missin took a quick free kick to pull the deficit back to one, but the hardworking Steeton side couldn’t be broken down and walked away with another scalp to put with the weekends win over Golcar United.