Campion Looking To Bounce Back From Cup Exit 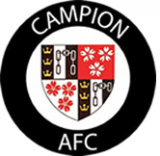 Campion AFC are looking to get back to winning ways after Saturday’s dramatic last minute loss to Bedlington Terriers in the FA Vase. A midweek fixture against East Yorkshire Carnegie offers them the chance to do so.

Manager James Bicknell acknowledges the opportunity “we are looking to bounce back from Saturdays defeat… which was hard to take with them scoring with the last kick of the game”. However Bicknell also recognises the challenge that Carnegie will bring to the Sportsbulk Stadium “our opponents have started well so we knows its going to be a tough game”.

Club Director of Football Andy Shepherd has praised the midweek performances of Campion AFC  “we have played very well in all our midweek games this season and hopefully tomorrow will be the same”. Campion ran out 4-1 winners in their last evening home game against Ollerton FC.

A scorer in the win against Ollerton was Dan Cunningham, who has scored 4 goals in his last 2 games, both Bicknell and Shepherd have been impressed with Cunningham’s start to the season “it’s not just the goals he has scored but his work rate off the ball that has been really impressive”.