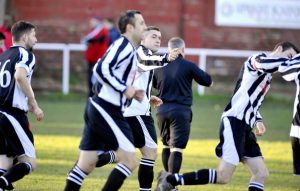 The Campion Development squad continued their good run yesterday with an impressive win over Ventus Yeadon Celtic. Usman Hussain continued his good run of form with the opening goal but the game was changed when the Ventus keeper was sent off for a reckless challenge on Josh Ludford. Hellewell converted the penalty and just 10 minutes later the game was again rocked as Nathaniel Dacres was also sent off for dissent following a foul in the box on Hussain.

Against nine men Campion made hard work of it against an enthusiastic Ventus side but eventually came out 4-1 winners with Josh Ludford capping off a victory with a goal on the break.