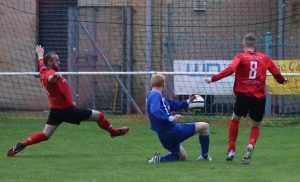 Campion Development Squad started their season with a 1-1 draw at home to Wibsey FC. Despite an early set back in the form of a Jamie Brennan goal, the young side dominated the game and equalised in the second half through Sadio Barry from a corner. In fact it was only really failure to convert chances that stopped Campion taking away all three points as they created chance after chance.

Carl Trenerry, appointed captain again before the game had a towering performance winning everything in the air and rightly earning himself a Man of the Match performance. Manager Mark Palfreeman commented that although a draw was disappointing with the number of chances his side had created, it was an encouraging start to the seaso