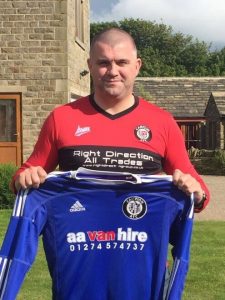 Seven years after retiring from professional football, and just three weeks from his forty second birthday, former Scottish International Dominic Matteo will make his competitive return to football for the Development Team of Bradford’s based Campion FC when they play Newsome in Huddersfield on Saturday 2nd April.

Matteo, who won 6 caps for Scotland and played 278 games in the Premier League for Liverpool, Leeds and Blackburn described the prospect of playing for Campion as “a massive challenge, perhaps one of the biggest in my career. I just hope that I can put in a performance that will do justice to the rest of the lads.”

“It’s exciting for us to have a former Premiership footballer in our ranks. He brings with him a vast amount of experience which will be invaluable for the development of some of the younger players.

Dom might have played over 350 professional matches for some very big clubs. He might have played against some great players and scored a Champions League goal in the San Siro against Milan. But on Saturday he has to realise that he will be turning out in Newsome, which is not Milan, and that he is representing Campion, not Liverpool or Leeds.”

Dom Matteo comes out of retirement