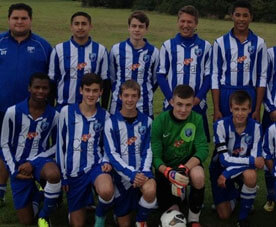 Following a turbulent season in 2014/15, Campion Reserves have seen a change in both management and playing staff in the close season.

Mark Palfreeman, who was brought in halfway through the season along with Howard Gordon and Delroy Dacres, has taken charge along with new arrivals Dave Turner and Chan Renardson.
Many will know Chan, not only from his Tyersal connections but also as a regular referee in the Bradford Sunday Alliance.

Dave brings with him a number of players from Wibsey Lions in a merger which sees Campion AFC establish an Under 21’s side while also freshening up the look of the playing staff of the Reserve team.