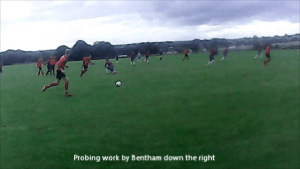 Campion AFC Development squad managed to come away from Thornes FC with a 7-4 win yesterday in a game that proved to be a goalfest.

Although Thornes scored four first half goals, which was more than Campion had conceded in all their games so far this season, Chris Hellewell’s return to goalscoring form and an inspired performance by Josh Ludford ensured they were always within reach.
The pick of Hellewell’s goal was a shot from 25 yards which sailed into the top right hand corner of the goal. But not wanting to be outdone, Ludford offered something even more special as from a similar range he hit a rocket which fired past the goalkeeper before he could blink let alone move.

An honourable mention also goes to Paul Davidson whose last ditch tackle in the second half may not be celebrated like a goal but was every bit as important in what was a good away win.