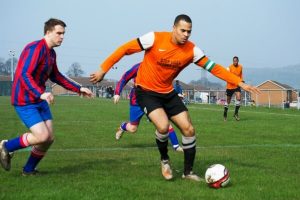 Campion Development squad finally felt the bitter taste of defeat as they were beaten 3-1 by Huddersfield outfit DRAM Community FC at the AA Van Hire stadium. Despite a spirited second half display which nearly saw the home side get back into it, DRAM held on to a lead created by first half goals from the prolific strike force of Craig Thompson and Lee Turner.